One of ILDA's most important programs and Member benefits is the annual ILDA Awards. This gives Members the opportunity to gain recognition for their hard work and high-quality shows. The Awards can be described in ads and other marketing materials. ILDA Awards help prove a company's ability to do world-class laser shows.

Since 1988, ILDA has held an Awards program for Members. There are three main judging categories:

In addition, a Special Achievement Award is given periodically by the Board of Directors, for significant work outside of the main ILDA Award categories.

For a chart showing all past ILDA artistic and technical award winners, see this page. Winners for each year can be viewed using the menu; go to Awards and then each individual year under the heading "PAST ILDA AWARD WINNERS".

How judging is done

The Awards process begins, usually in the spring of each year, with members submitting entries.

For Artistic awards, entry documentation is in the form of a video of the show, or images in the case of Laser Photography. During some years, entries in the "ILDA Standard Projector" categories could also be submitted as laser ADAT tapes. These were judged in the laser format.

Up until 2017, a three-judge Artistic award panel reviewed the entries and selected the winner. Judges were usually selected both from outside the laser industry (giving an outsider, audience opinion) and from inside (giving a knowledgeable insider's perspective). It took one or two days for judges to watch all the shows in each category.

Beginning in 2018, video entries are put online in a secure, password protected area. For each category, three ILDA Members acting as judges view the entries and select that category's winners. However, there might be a different group of three judges for each category. (One reason is that if a person has an entry in a category, they cannot judge that category.) This reduces the workload on any single person.

Laser Photography entries are put online and are judged by ILDA Members voting via email. Laser Jockey entries are judged live during the annual ILDA Conference, and are voted on by attendees.

The current judging criteria are here.

To find out about judging for a particular year, use the "Awards" menu to find the Award winners for that year, then scroll down to see if there is a blue section "Judging and scores".

The Fenning Award for Technical Achievement goes through a similar process of entering. For Technical entries, written documentation is crucial, along with an optional video showing how the product works.

A three-judge panel reviews the entries and picks the Fenning Award winners.

The current judging criteria are here.

(For two years after 2004, an additional technical category was added. This consisted of products presented at the annual Advanced Technology Workshop meeting. ILDA members who attended the workshop voted for the Hardware, Software and Laser products of the year.)

The Career Achievement Award has a different entry and judging process. The process has changed over the years. In some years, the Awards Committee and Board of Directors came up with CAA nominees. In recent years, nominees come from ILDA Members. Once nominated, the nominees or their sponsors provide a biography.

In the past, a three-judge panel reviewed the nominees and chose a winner. Beginning around 2012, ILDA Members themselves voted for CAA nominees in order to choose a winner.

A list of past Career Achievement Award winners is here.

The Special Achievement Award is voted on by the Board of Directors with input from the Awards Committee. It is given for significant achievements that are not already sufficiently covered by existing ILDA Award categories.

It does not have to be given each year.

A list of past Special Achievement Award winners is here.

Presentation of the Awards 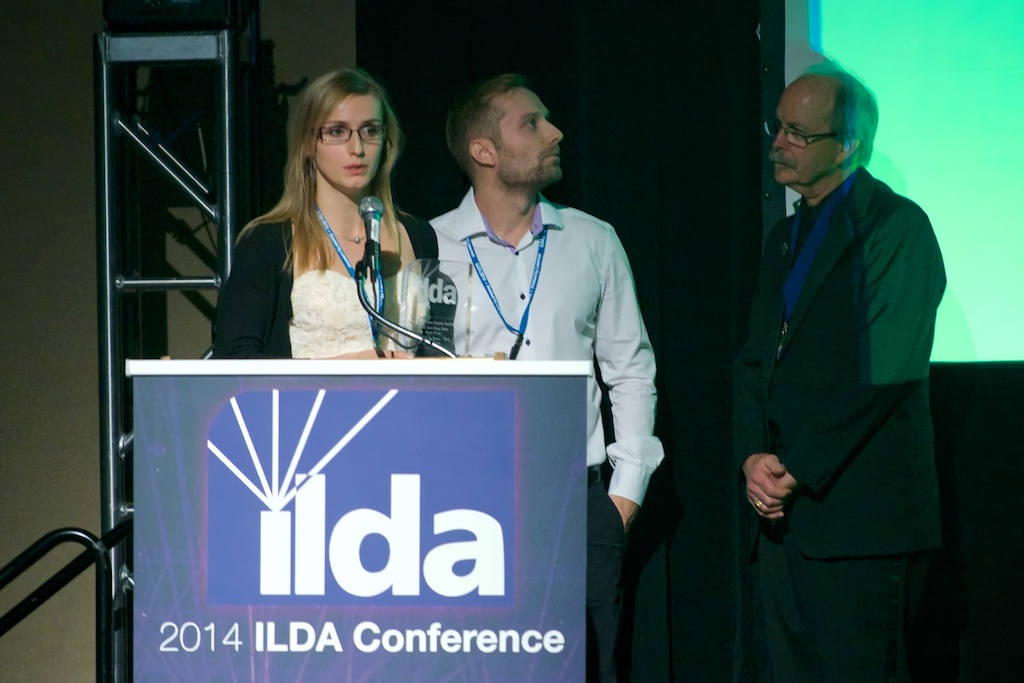 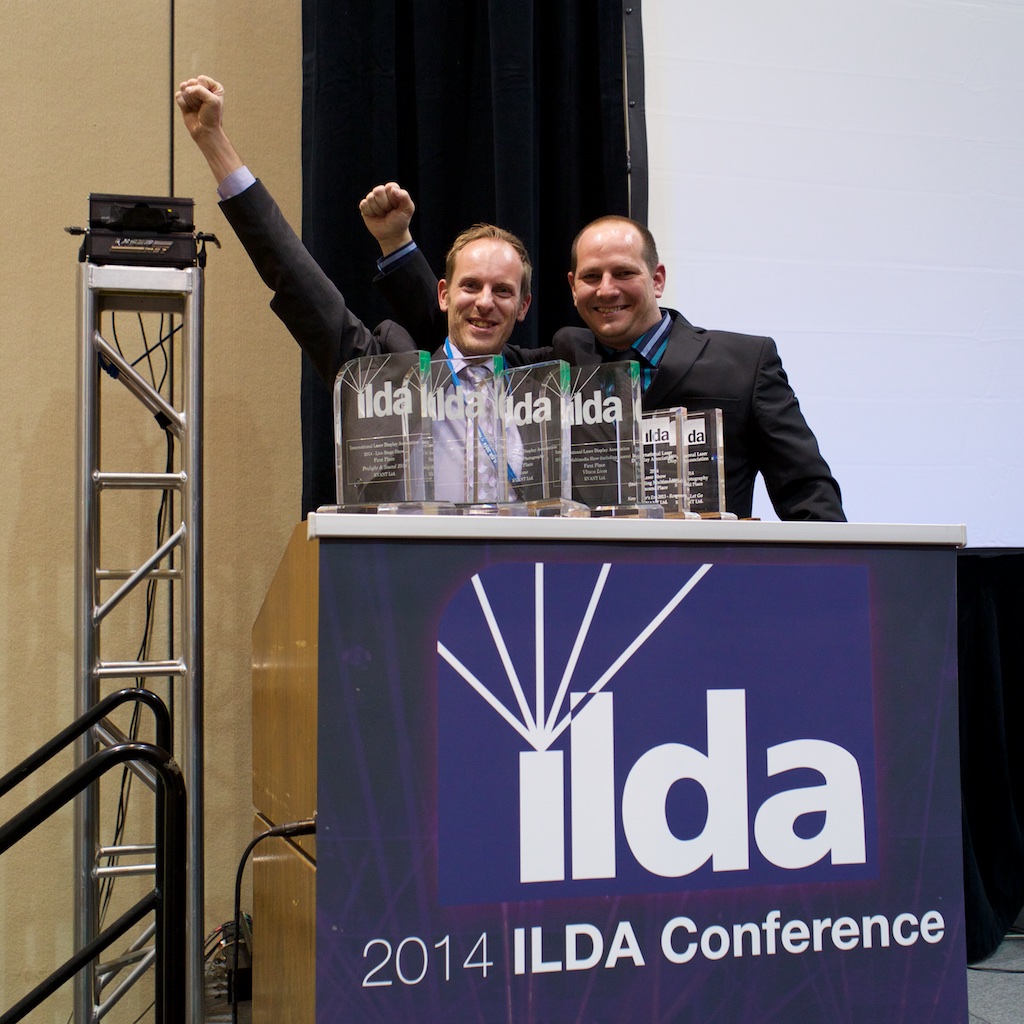 ILDA Awards are presented each year at the Awards Banquet, held during the annual ILDA Conference. Selected winners are shown -- usually the first place entries, and laser entries. All winners come up to receive their awards and briefly speak.

First place winners receive a trophy in the shape of the ILDA logo. Winners of lower places receive smaller trophies or plaques.

Prior to 2013, a videotape or DVD was usually prepared of the winning entries. Since 2013, Awards Banquet attendees receive a USB drive with all winning videos. We also publish online a page listing all winners, such as this one from 2020. It includes links to the booklet handed out at the Awards Banquet, which has additional details about the credits and descriptions of the winners. We usually upload winning entries to ILDA's YouTube channel.

Frederick Fenning worked at Laser Displays Inc. and Image Engineering, two early pioneers of laser graphics. He developed a system called Digital Video with a codec for recording complex laser drawings and logos. He was also “one of the first people in the world to build … network-addressable appliances”; source here.

In early 1998, the ILDA Technical awards were renamed the Fenning Awards for Technology Achievement, to honor Fred.

“We begin this month by relating news of the death of Frederick Fenning. Fred’s plane crashed over a lake in Idaho as he was piloting his plane across country to visit family in August 1997.

The oldest of eight children, Fred is survived by seven siblings, numerous nieces and nephews, and his parents. A scholarship fund, Fred Fenning (77), has been established; contact Bonnie Kellerman in the MIT Office of the Treasurer for more information. Special thanks to Fred’s brother, Dr. Walter Fenning, who graciously provided information to us.”

Includes two photos and a link to an elegaic poem composed by Sandra Steingraber.

Information from Walt Meador, written in 2016

And before my faint memories of my knowing Fred go away, I will chat for just a moment about what I do remember from my days with Fred Fenning while we worked for Bart Johnson and Laser Displays.

I don't know any other electrical engineering graduates from MIT, but I doubt too many were so loose and open while explaining complex issues with such knowledge and ease to dummies like me. His patience was so laid back, and his confidence in solving a technical issue put those of us in the show mode at ease. Just because Fred was there.

He loved his fraternity, lived at the frat house while in school, and maybe even after graduation, for sure he was there about every week even after he graduated, as I recall. Fred admitted that graduating with the EE degree from MIT for him was difficult. Fred did like to party with his fraternity, and I know that helped take a little longer!

First time I was around Fred, he was building his own design of a Spectra-Physics 270 power supply along with the laser head. Really, all Fred was buying from Spectra-Physics was the gas laser tubes.

When I left Boston for good in the winter in a snowstorm, I had a Toyota that flamed out on the Mass. Turnpike. Fred came and got me and loaned me his van to take my stuff back to the Midwest. A couple of years later, with Fred then at Image Engineering, Fred built me an image rotator, and gave it the serial number "Walt's Rotator". That was of course, back in the wire wrap days.

I am sure there are those that remember Fred better than I do, but I feel very fortunate to be one of the guys that got to work with Fred Fenning.

These are the ILDA Award compilation videos from 2015 to 2020. Each one is about 20-45 minutes long, and has excerpts from the best shows of the year.

If you want to see each 2016 winner as it was entered (up to 4 minutes maximum), go to the ILDA YouTube playlists, and click on the “2016 ILDA Awards”. Every winning video is available at its full entered length.

If you want to see each 2017 winner as it was entered (up to 4 minutes maximum), go to the ILDA YouTube playlists, and click on the “2017 ILDA Awards”. Every winning video is available at its full entered length.

If you want to see each 2018 winner as it was entered (up to 4 minutes maximum), go to the ILDA YouTube playlists, and click on the “2018 ILDA Awards”. Every winning video is available at its full entered length.

If you want to see each 2019 winner as it was entered (up to 4 minutes maximum), go to the ILDA YouTube playlists, and click on the “2019 ILDA Awards”. Every winning video is available at its full entered length.

If you want to see each 2020 winner as it was entered (up to 4 minutes maximum), go to the ILDA YouTube playlists, and click on the “2020 ILDA Awards”. Every winning video is available at its full entered length.