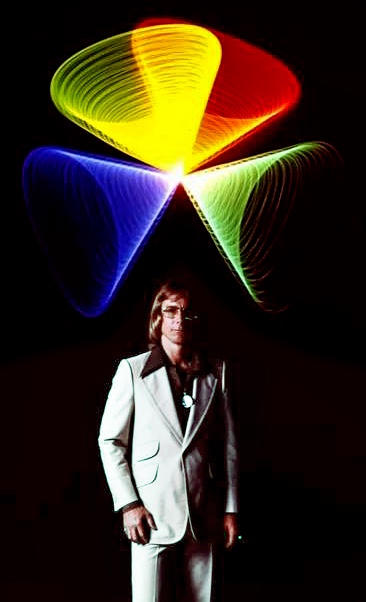 Ivan Dryer, pioneering laser artist and founder of Laserium® planetarium shows, passed away on July 27, 2017 at the age of 78.

When Ivan Dryer was 20, he joined the Griffith Observatory and Planetarium in Los Angeles as an astronomer. He also was an aspiring filmmaker. In late 1970 he collaborated with Caltech physicist Elsa Garmire, to film laser light patterns she had created. This became the short film LaserImage.

Filmed lasers, however, were flat. They did not have the vibrant scintillating coherent speckle of live laser light. Dryer and Garmire approached the Griffith with a proposal for a live show to be called “Laserium”. They were turned down — both by the Griffith and by banks.

Three years later, Dryer and Garmire put together a demonstration at Caltech, using a 1-watt krypton laser, This time the new head of the Griffith gave an OK for a one-month test at the planetarium.

Laserium premiered November 19, 1973. Four weeks later, 500 people a night were being turned away. Dryer’s company, Laser Images Inc., went on to do laser shows in 46 planetariums and locations in other cities as well. The shows were seen by over 20 million people. At its peak, Laser Images had 70 employees.

In 2002, the Griffith Observatory planetarium was to be closed for renovations. Laserium’s last show there was January 5, 2002. It had run for 28 years — the longest running theatrical attraction in Los Angeles, and the longest-running laser show in the world.

As new technologies such as bright, large, hi-def video screens and computer graphics improved, classic laser shows with their lo-res wireframe images fell out of favor. Laserium scaled back, while Dryer kept working with lasers and Laserium projects. He officially retired in 2009, when Laser Images Inc.’s assets were acquired by Jon Robertson of DayStar Lasers.

In 2013, Dryer received the first IMERSA Lifetime Achievement Award from the Immersive Media Entertainment, Research, Science and Arts association. IMERSA noted “In addition to his pioneering creative and technical achievement, he also did something unprecedented for planetariums and science centers: Laserium showed that these facilities could be used as entertainment venues, increasing attendance and generating revenue…. Dryer’s influence carries on with presentations where light becomes an actor.”

In his acceptance speech, which received a standing ovation, Dryer recounted the history of his laser work, with many humorous anecdotes. He concluded by saying “I’m delighted that we managed to enlist what was then a somewhat esoteric technological device that has been used to guide missiles and telescopes, to instead guide the neurons in millions of brains to dance synesthetically in a fusion of music and image that enhances both -- to create a machinery of joy. The compliment I most prize was from a woman who came up to me and said, ‘You know, I envy you, you’re spreading joy!’”

Dryer cared for his convalescent wife, Carol, through her death in June 2016. This took a toll on his health as well.

A documentary film on his life and work is in production, and is expected to be released in 2018.

Additional background and reminiscences are at Laserium’s website, photos and text at the Leaping Robot Blog and the links at Dryer’s Wikipedia page.

We also have a PDF with three articles written by Dryer in 1991 and 1992 for ILDA’s magazine, The Laserist.

Many older ILDA Members had their first exposure to laser displays at a planetarium running Laserium shows. Dryer’s example helped inspire these Members to get into the business, and often to found their own laser display companies.

Within ILDA, Dryer was known for his quiet, thoughtful and kind demeanor. He was a founding Member of the association, served on the Board from 1990 to 1994, and was ILDA President from 1990 to 1992.

Laser Images was host of the 1991 ILDA Conference, held in Los Angeles. The company won 43 ILDA Awards for artistic and technical excellence, in the years between 1988 and 2000.

A 2002 newspaper article summed up how laserists felt about him: “Dryer appears to be universally regarded with awe and respect.” 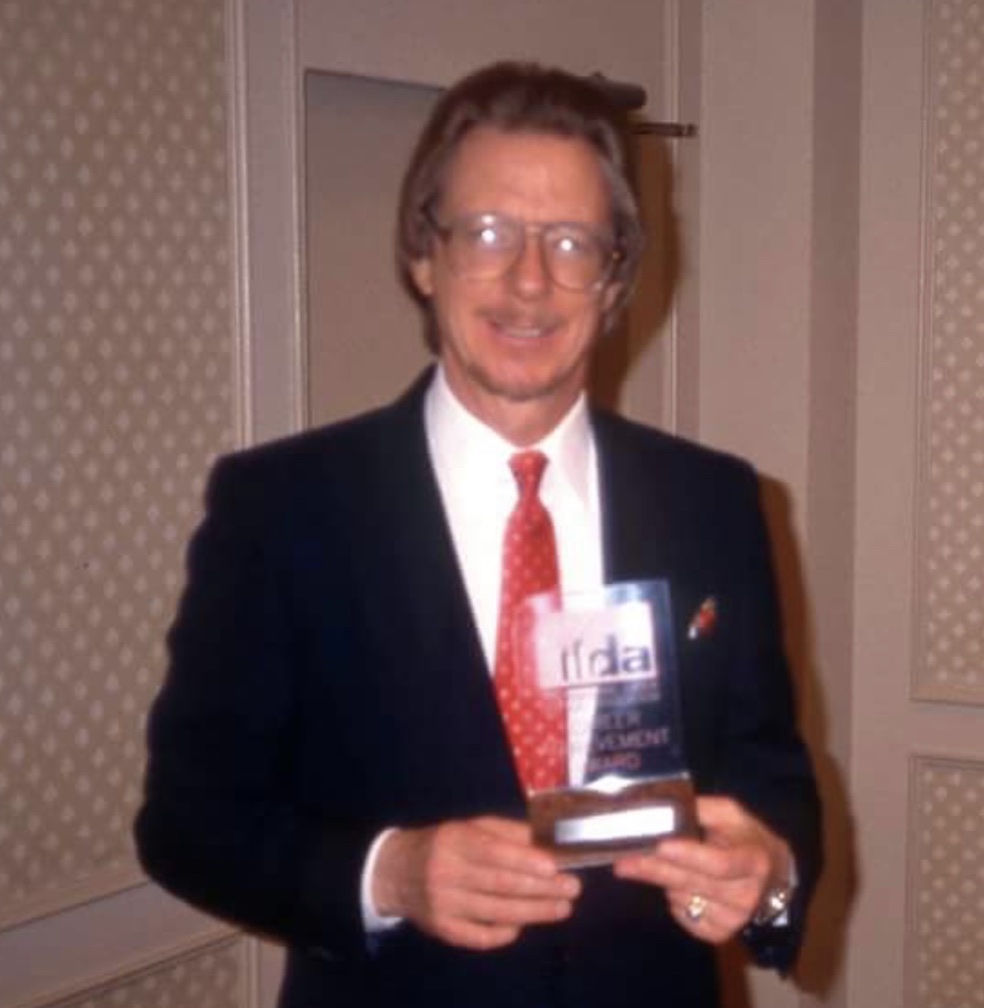 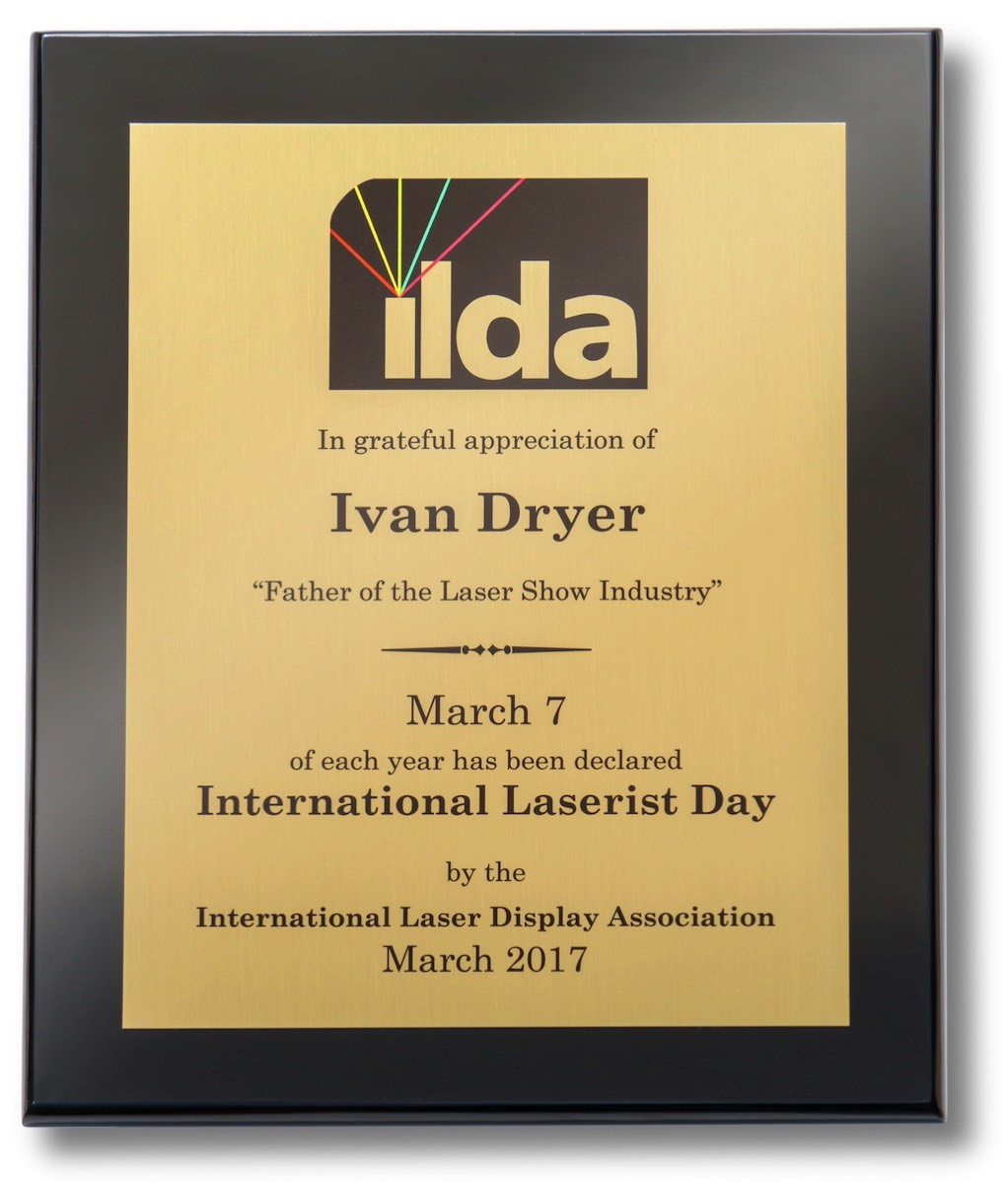 In early 2017, ILDA honored Ivan Dryer by declaring his birthday, March 7, to be “International Laserist Day.” He was sent this plaque, to let him know how much he means to ILDA and laserists in general.

His brother, David Dryer, presented it to him and told ILDA “Ivan had a big smile on his face when I showed him the plaque. That's the first smile in about a year!”

From Linda Nebon via Facebook: Friday August 4th at 1:00 pm Pacific Time is the Internment Gathering for Ivan Dryer to rest next to his beloved Carol’s grave, at the Forest Lawn Memorial Park - Hollywood, 6300 Forest Lawn Drive, Los Angeles, CA 90068. For those who can and wish to attend, meet at the Gate and Parking area BEFORE 1:00 pm to await escort by cemetery personnel. This will be informal.

A Memorial Event is being planned for some weeks later, probably early September, that will allow for planning, as well as producing, a cherished memory of a wonderful man.