Below are some links to laser show history websites etc. We welcome submissions to add to this list. Also, if any of the links below should no longer work, please contact us so we can try to fix them.

As the first ongoing commercial laser show, the history of Laserium® is fairly well documented, including a documentary film. For links to get started, see ILDA's history webpages about Laserium and about Ivan Dryer, co-founder of the Laserium shows and the company behind it, Laser Images, Inc.

A 2019 feature-length documentary, "Laserium: The Gods of Light" was produced and directed by Bjorn Schaller. Starting in October 2021, it is available for rent or purchase at YouTube. The documentary was shown at the 2019 ILDA Conference in Orlando and an 8-minute excerpt was shown online during the 2020 ILDA Cloud Conference. For his efforts in making this documentary, Schaller was voted by the ILDA Board of Directors to receive the 2020 ILDA Special Achievement Award for Documenting Lasershow History; a description is on the 2020 Awards page.

The Museum of the Moving Image has two pages referencing Laserium and the first laser shows. Creatures of Light: LASERIUM from July 2018 primarily discusses Laser Images, Inc. co-founder Elsa Garmire's role in early light art. At the bottom of the page is a link to a restored version of the Laserimage film that Dryer and Garmire created. Origins of the Laser Light Show at MoMI describes a May 31, 2019 showcase of six short films from the early days of laser shows, plus a discussion with Elsa Garmire, Joshua White and lumia collector AJ Epstein.

Item 3 on this February 2019 online story "Long Gone Minnesota" is about Laser Fantasy, one of the largest lasershow companies in the U.S. in the last century. The item is from when Floyd Rollefstad, founder of Laser Fantasy, was closing his Minneapolis laser theater. The company later relocated to Seattle. The story includes a February 15, 1982 video about Laser Fantasy. A screen capture from the video is shown below.

Floyd Rollefstad wrote a personal history for the Laser Fantasy website, about how he got started with lasers and the adventures of his early laser show enterprises.

An online Tedium magazine article, "Frickin' Laser Beams" is about Dick Sandhaus' company Science Faction, one of the early pioneers.

IEC was founded in 1979 by Jennifer Morris, the 1992 ILDA Career Achievement Award recipient; Fred Fenning, for whom ILDA's Fenning Award for Technical Achievement is named, and the 2021 ILDA Career Achievement Award recipient; Eric Eisack; and Peter Wolf. Fred, Eric and Peter had previously been involved with Laser Displays Inc. In 1981, Walter Gundy joined IEC as a shareholder. Morris was one of the first to use representational laser graphics (drawings, not abstracts) in 1977. In 2000, IEC was purchased by Baltimore-based Advanced Entertainment Technologies, which adopted the IEC name. 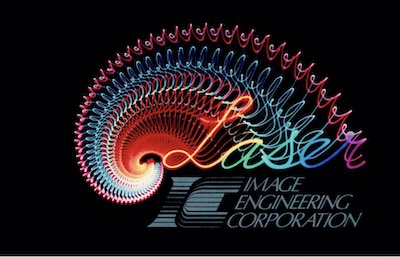 A magazine article from February 2010, "Strung Out On Lasers: The Who's John "Wiggy" Wolff and a cast of fellow pioneers tell Jerry Gilbert the story behind laser technology's emergence in the rock'n'roll touring world."

An undated Shindig magazine article about the co-founder of Audio Visual Imagineering, and current president of Laser Show Design. This actually describes his pre-laser activities with liquid light shows in the late 1960s and early 1970s, which eventually evolved into AVI and laser shows.

Rockne Krebs (1938-2011) was a pioneer who truly was an artist — gallery shows, art magazines, portfolios, etc. He just happened to use lasers as a key part of his artistic output. His U.S. patent 3,622,228, filed in September 1969, was apparently the first patent for laser artistic display. 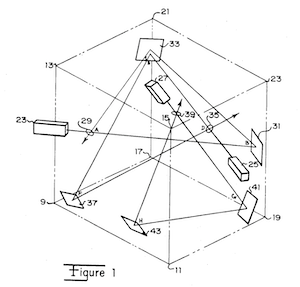 Tim Walsh has scanned a packet given to him when he met Rockne. It includes a 1999 article "The evolution of a laser artist" in Optics & Photonics news, plus a list of his laser exhibitions which start in 1968(!). You can download a PDF of Tim's packet. More information is at Rockne's Wikipedia page and at the website rocknekrebsart.com.

Holographer Jason Sapan wrote about Rockne's laser work: “…unlike the purveyors of laser light shows, Rockne avoided the sophistication of electromechanical devices and chose to use his intellect and hand crafted tools to paint with the light of the laser. He chose to find his own path and was a true artisan in creating his own concepts and style unlike what anyone else was doing. Light years ahead of the pack, his work pioneered a new era in the use of laser light as a true artistic form and not as a mere technical stunt.”

The photo below shows a 1983 work which was a 7-mile long laser beam from Mount Wilson to the California Institute of Technology. Caltech art gallery director Jay Belloli wrote: “Rockne let the laser beam spread naturally so, by the time it reached a large white wall on the Caltech campus, it was like a 30-foot-tall painting of green light - constantly changing, because the laser light responded to the changing currents of air that it passed through. Rockne titled the piece The Green Hypotenuse, implying that it was part of a right-angle triangle in which the other two sides could only be seen in the mind.” 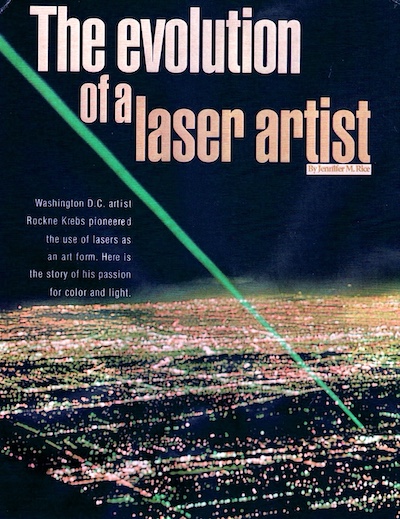 This is a thread from the PhotonLexicon.com forum, about the history of lasershow controllers and software. As of February 2019 the thread has 153 posts.

The LaserShowWiki is "dedicated to mind mapping the laser show industry and hobby." As of February 2019 it has information about:

Some webpages put together by Patrick Murphy. Pages discuss Laser Displays Inc., Laserium, Murphy's pre-Pangolin activities, a discussion on the Laserist List, and links to other lasershow history websites.

A file showing an early Pangolin demo video, from the late 1980s or early 1990s is available upon request from ILDA. It is not put here at the website due to the large filesize. 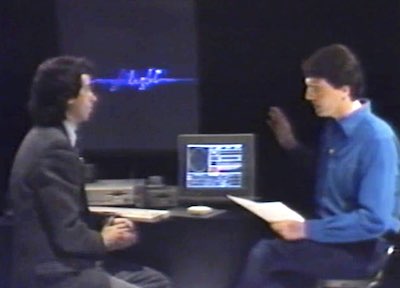 A December 2014 blog post "Art at the Speed of Light" by Patrick McCray covers early laser art efforts. McCray also wrote about pioneering laser artist Rockne Krebs in an October 2015 blog post entitled "Remembering Lines of Light," and about Laserium in a January 2015 blog post "Lasers, Pot Smoke, and the 'Visual Art of the Future'," and in an April 2016 blog post "From Laser Art to Laserium."

A Short History of Laser Shows

A magazine article from OPN Optics and Photonics News in May 2010, by Patricia Daukantis

A 2006 paper by Vivi Tran, written for a Harvard class assignment, is "The Radiation Control for Health and Safety Act of 1968: History, Accomplishments, and Future." The paper is 65 pages long; search for "laser" to find history and regulations specific to lasers.

This document contains two articles published in 2017. One is "The CDRH/FDA Radiation Safety Standard for Laser Products: A History" by Jerome Dennis, formerly a U.S. safety regulator. The other is "The Early Stages in the Development of the IEC Laser Performance Standard" by Dr. David Sliney, who helped develop laser safety standards.