To be presented online in Fall 2020

The ILDA Awards are the laser display industry's equivalent of Hollywood's Oscars. Each year, they honor companies and individuals from around the world for their achievements. These awards will be bestowed during the 2020 ILDA Conference taking place online:

• The Special Achievement Award is given for significant achievements that are not already sufficiently covered by existing or future ILDA Award categories. It has only been given twice in ILDA's history, in 2013 and this year in 2020.

Presented to Bjorn Schaller, creator, director and producer of the feature-length documentary 'Laserium®: The Gods of Light." This labor of love traces the rise, and fall, and rise again of commercial laser light shows, focusing on pioneer Ivan Dryer — who is not widely known to the general public — and his company, Laser Images Inc. The film is entertaining for general audiences, while bringing wonderful memories back to laserists who lived through those exciting times. 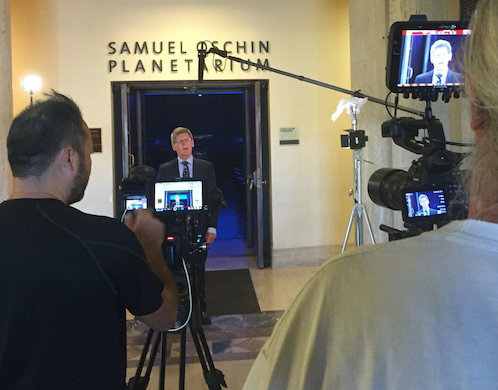 In 2015, Bjorn Schaller filmed a collaborative performance between Laser Images Inc. (then run by Jon Robertson) and the Laguna Art Museum. He edited the four-hour event into a one-hour show which was shelved. But he felt the story of laser shows was interesting enough that he contacted Laser Images with the idea to make a film.

Part of his enthusiasm for the project was his own personal inspiration related to Laserium®. In 1978 he attended a Tangerine Dream concert which included Laserium-created backgrounds. This inspired him to move from being a classical pianist to working with synthesizers and eventually into film composition and editing.

Schaller’s idea was audacious since, though he worked in post-production, he had never before made an entire film. He put together a budget and timetable in December 2015. He projected that it would take one year, full-time, to produce a 90-minute documentary on laser shows and Laserium.

He contacted ex-laserists who were very helpful. For example, Ron Hipschman had digitized 30 years worth of Laserium video clips and stills. It took Schaller six months to watch every one of the over 4,000 clips and images.

He also was able to document the last year of Laser Images in their Van Nuys location, and to film the last Laserium show there. He spent significant effort to have the laser imagery look as good as possible within the non-coherent, lower dynamic range of film and video. In one case, he spent hours adjusting settings to get minutes of really good-looking footage.

Schaller was able to meet Ivan Dryer, who unfortunately was not healthy enough to be interviewed. Schaller recalled “I kept visiting him while progressing with filming and watching his decline. The last time I was with him, I played a few scenes from the film on my laptop, holding it over his bed. Ivan said: "it looks much better than I expected" and "I can't even walk, but you make me fly". That made me feel so good about what I was doing, I started to ignore that it was taking longer and longer.”

He was ready to start editing in mid-2017 but suffered a series of personal setbacks including a three-week period in which his closest friend, his closest family member, and Ivan Dryer all passed away.

During 2018 he edited the film, and wrote and recorded the music. Then in November 2018 his home burned down in the California wildfires. Fortunately for the film, the footage and materials were at his studio, which was untouched. He moved into the small, windowless studio and worked 24/7 for eleven months to finish the film and a trailer. Schaller recalled “It was like being at a laser show for almost a year.”

His goal was to complete the documentary in time for the November 2019 ILDA Conference in Orlando. He did make that goal, after 80 days of filming, 500 days of editing, and 5,000 hours of recording, mixing, color correction and “thinking about it.”

"Laserium: The Gods of Light" had its world premiere in front of a closed, private audience of ILDA Members. Many who had lived through the events were misty-eyed at seeing their passion finally captured on film.

The result is an artistic and technical achievement:

For his tireless devotion and personal sacrifice in bringing the Laserium story to the general public and our Members, the ILDA Board of Directors votes to honor Bjorn Schaller with the 2020 ILDA Special Achievement Award for Documenting Lasershow History.

This information will be updated after the online ILDA Awards Presentation, scheduled for mid-fall 2020. When we have a specific date, ILDA Members will be notified.