The Guinness world record for "Largest Laser Show" was set October 17, 2019 at the Staples Center in Los Angeles. 642 laser beams were used in the spectacle, designed by ILDA Member Image Engineering of Baltimore, Maryland.

Andrew Glass, a judge with Guinness World Records, certified the record. ILDA Member Adam LaBay helped count the lasers to ensure all beams were visible and valid. This record counted the number of individual beams emitted (e.g., one beam per aperture).

The record attempt occurred during the first intermission of the Los Angeles Kings - Buffalo Sabres hockey game. Unfortunately, the Kings lost the game, 3-0. The date was the 20th anniversary of the first event at Staples Center, a concert by Bruce Springsteen and the E Street Band. 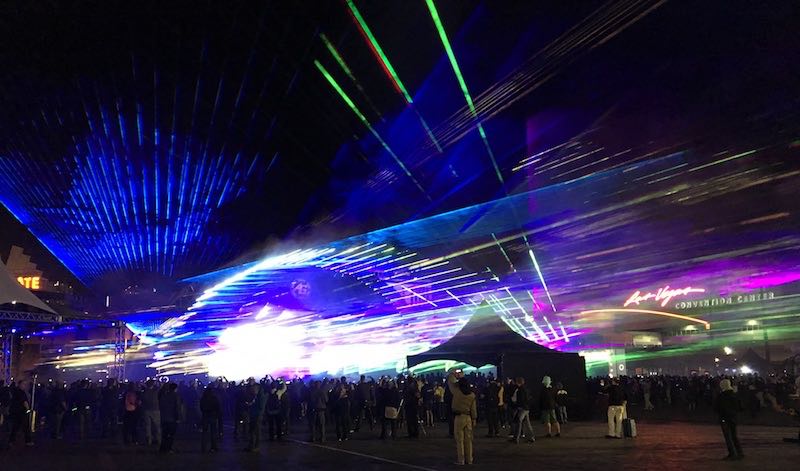 On November 18, 2017, ILDA Member ER Productions set a Guinness World Record for the "Largest Laser Show." They used 314 lasers to present a spectacular seven-minute display, choreographed to music by DJ Damian Gee. This was done outside the Las Vegas Convention Center, in front of attendees of the LDI lighting trade show.

ER demonstrated how lasers can go beyond being a few special effects to encompass an entire stage — or in this case, three stages.

Over 12 tonnes of equipment valued at approximately USD $3.5 million – including 11km of cable – was used during the show, which was held at the Las Vegas Convention Centre. Due to its proximity to the McCarran International Airport, a 100m x 15m termination wall was erected to ensure that no lasers affected aircraft using the popular airport. During the final and crucial seven-minute closing sequence, an enormous 1,377 watts of laser power lit up the Nevada skyline.

The laser show took weeks to design and 72 hours to set up for the world record attempt. Laser fixtures from ER Productions’ U.S. base in Las Vegas were used to beat the unofficial world-record set by the company back in 2016.

ER’s proprietary lasers in the show included blue Burstbox fixtures, Beambursts, BB3s and Laserblades. The rig was completed with some of the company’s newly-launched fixtures, including Storm, Lynx and Kinekt units, which were brought to market in 2017. The show was controlled centrally from front-of-house using three Road Hog 4 consoles and Beyond laser software.
From ER’s press release 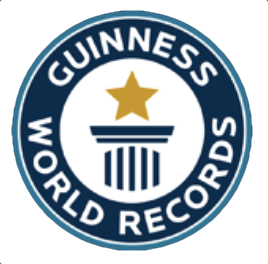 For the 2017 and 2019 records, Guinness World Records Ltd. used the following definition for evaluating attempts at "Largest Laser Show":

Guinness is not bound by this for future attempts. Since it is Guinness's record and certification, their definition is subject to change. Any world record attempts should contact Guinness to go through their official process, and as part of this, confirm their current definition.

Persons using this definition should note that "laser projector" can be interpreted two ways: 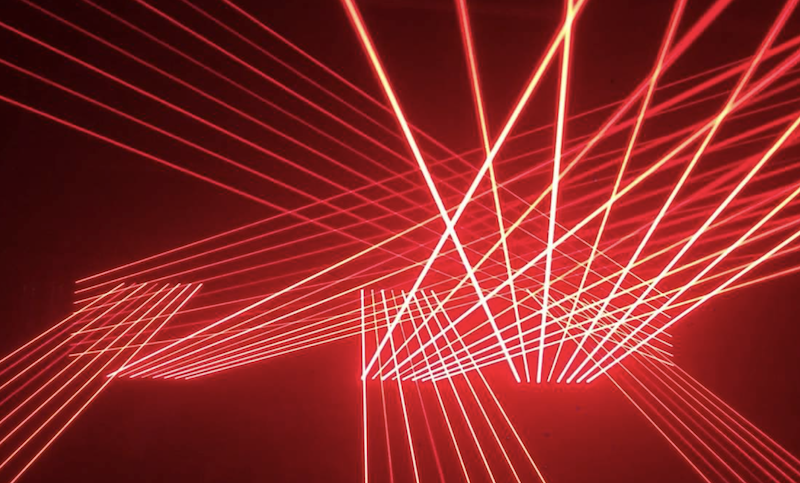 The following guidelines were developed to assist companies attempting world records related to laser shows, and also to help out any certifying authority such as Guinness World Records Ltd.

The guidelines are suggestions by ILDA and are not binding on companies or certifying authorities.

The primary purpose is to define "laser" when counting how many lasers are used in a show. Other purposes are to define "laser show" as opposed to general-usage lasers or laser displays, and to ensure that only legal and safe shows are counted for world record purposes.

It is up to the certifying authority to decide whether a particular record is for "most lasers", "most laser projectors", "total watts", etc.

That said, ILDA's guidelines are for "most lasers" since an audience experiences only the laser beams and effects.

To be counted as a "laser", a laser diode, laser tube or other laser source must project a coherent light beam or a coherent light lumia pattern through the air or onto a surface, where it is visible to an audience or in a viewing area. (To ensure mid-air beams are visible, hazers, smoke or fog machines are usually used.)

Usually the output from a laser source is projected as a beam but it may go through diffusing glass or plastic to make gauze-like lumia patterns on a surface. This counts as one "laser" even though in this case there is not a well-defined beam.

Laser must be projected

Laser must be projected

Note the word "project" in the first sentence of the ILDA guidelines. This requires that the laser light travel through space as a mid-air beam, or to a viewing surface as with laser graphics and lumia.

Conversely however, laser graphics may be rear-projected onto a screen. This counts as a "laser" since the beam is clearly projected — it travels a significant distance to reach the screen.

Laser light must be visible

Laser light must be visible

The laser light itself does not have to be in the visible spectrum (roughly 400-700 nm), as long as the laser creates a visible effect. For example, the beam from an ultraviolet laser will not normally be visible in mid-air. But the laser light would be visible if it is shined onto a surface that glows in UV light; in this case it would count as a "laser" for world record purposes.

If however the show uses lasers which are not intended to be seen, such as infrared lasers used to help prevent the audience from going into a laser area, these non-visible lasers will NOT count as a "laser" for world record purposes.

There are many projectors which have two, three or more laser sources inside, where the individual beams are combined to make a single laser beam. This may be done to combine multiple beams to get higher power and/or for color control, where each laser source is a different color and the final color is obtained by varying by the power output of each source.

When beams are combined in this way inside a projector, this counts as one "laser", since only the final combined beam is emitted.

Similarly, if two or more laser sources are located close to each other with the beams emitted in parallel, so that the viewer's impression is that there is a single beam, this counts as one "laser".

For fixtures or projectors with multiple laser outputs, each separate emitted laser source is counted. For example, a laser beam bar may contain 8 separate laser sources each with its own aperture. This counts as 8 "lasers".

Laser video projectors do not count as "lasers"

Laser video projectors do not count as "lasers"

Video projectors using laser sources to create part of all of the projector's light do not count as "lasers" for world record purposes. This applies even if the video projector is used to create aerial light patterns (beams, cones, sheets, etc.) that mimic conventional X-Y vector laser projector patterns.

What makes a laser light show special is that the lasers do things that other conventional light and video sources cannot:

Laser video projectors may be used during the show, but for the reasons above do not count as "lasers" for world record purposes.

For any world record using the term "laser show", the lasers must be operated in an artistic manner with the laser lights changing over time and/or space. It would not be sufficient to merely gather a large group of lasers and turn them on.

There may be cases where all the lasers are aimed together in an artistic manner, for example to create a large-scale static "light sculpture". This is a laser DISPLAY, but ILDA would not consider it a laser SHOW.

In addition to the laser lights changing over time and/or space, synchronization with music is another key factor to help determine whether the event is a laser show. However, this is not a must; there may be spoken word or even silent laser shows depending upon the artistic intent.

Other elements such as conventional lighting, video, fireworks, etc. may be used along with the lasers.

Minimum length of the show

Minimum length of the show

To establish a world record, there should be a minimum length of time for the laser show. ILDA suggests this be at least five minutes, but the length is up to the world record certifying authority.

If there are other non-laser elements used in the show, the laser parts added together should meet or exceed the minimum length of time.

It is suggested that there be at least one part of the show where all lasers are seen, or as many as can simultaneously be operated. This is in the spirit of a world record, to show off as many lasers as possible at one time.

Laser show must be legal and safe

Laser show must be legal and safe

For example in the U.S., a laser show would be required to have a valid variance from the Food and Drug Administration, as well as any documents and notifications required by state and local authorities.

In addition, the show must also be safe according to laser safety principles generally accepted by relevant organizations such as ANSI, IEC, ILDA and PLASA. (For ILDA, refer to Lasershow Safety - Basic Principles for the association's safe usage guidelines.)

Clear violations of these laws/regulations/rules, or of generally accepted laser safety principles, would disqualify a show from world record consideration.