Countdown to the start of the First Zoom Session

Countdown to the start of the Second Zoom Session

Countdown to the start of the Third Zoom Session

The deadline for entering the 2019 ILDA Awards has passed. Thanks to everyone who entered.

This page is for persons entering the 2019 ILDA Awards. You may enter laser shows produced or performed between January 1, 2018 and March 31, 2019. Winners of these Awards will be publicly presented at the ILDA Awards Banquet and Presentation during the 2019 ILDA Conference (date and location not yet set).

The deadline for entering all three Awards is Monday April 1, 2019, by 11:59 pm your local time. Details are below. 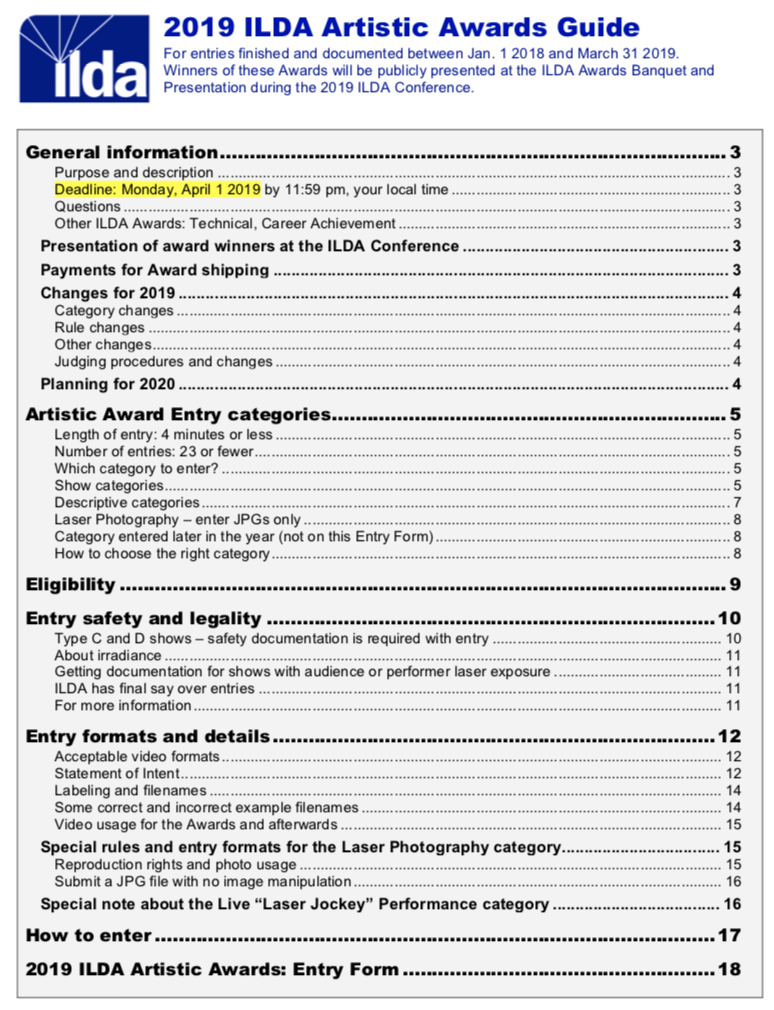 The 2019 ILDA Artistic Awards Guide includes rules and the Entry Form. You can download the Guide in these formats:

Upload your Award entry zipped file to your own filesharing service such as Dropbox, Google Drive or OneDrive. Then email to ILDA with the link where we can download your file.

• Added Category 5, Planetarium Show (this had been removed for the 2018 judging year)

• Category 8, Multi-Effect Laser Show: Clarify that this must include LASER images on a projection screen.

• Categories 11-13, Beams/Atmospherics: Must be only beams/atmospherics. No graphics or abstracts, no matter how brief, are permitted.

• It is allowed to use noise reduction software on Laser Photography entries. Often laser photos are shot in low light, which can result in digital “grain” on photos. It is allowed to reduce this noise so the image is smoother. (This does not change the image content, just reduces visual noise.)

• Gave ILDA the right to move entries if a particular category does not have enough entries.

• The video entry file size has been increased to 500 MB. (In past years, each video could not be over 300 MB but some people had trouble compressing files that low.)

• Judging will be done with judges viewing videos separately (up through 2017 judges were in the same room).

• Judges may differ for various categories (up through 2017 the same three judges looked at all non-photo Artistic categories; now each category may have a different group of three judges). 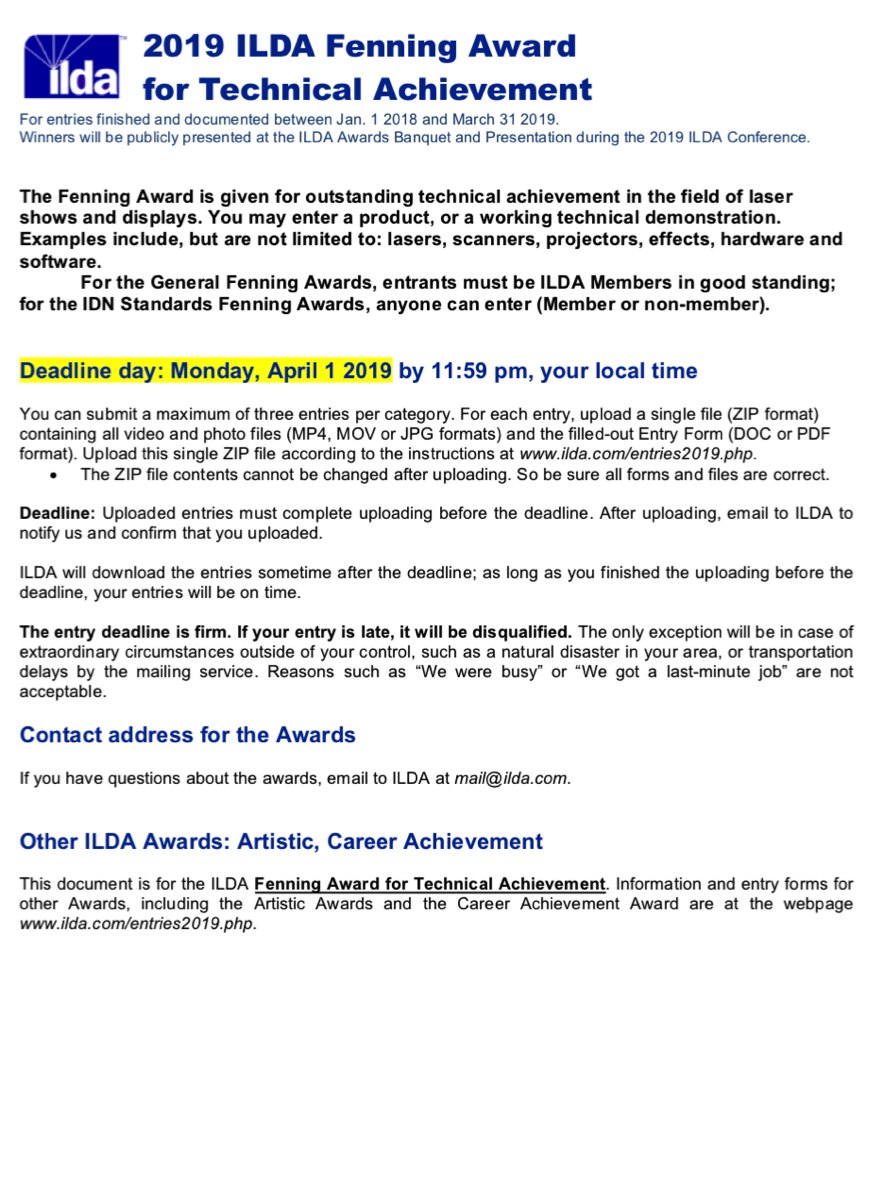 The Fenning Award for Technical Achievement is given for outstanding technical achievement in the field of laser shows and displays. Entries may be a product, or a working technical demonstration. Examples include, but are not limited to: lasers, scanners, projectors, effects, hardware and software.

The 2019 ILDA Fenning Technical Award Guide includes rules and the Entry Form. You can download the Guide in these formats:

Note that the Fenning Technical Award does NOT use an Entry Spreadsheet.

Upload your Technical Award entry zipped file to your own filesharing service such as Dropbox, Google Drive or OneDrive. Then email to ILDA with the link where we can download your file.

Email a nomination for the ILDA Career Achievement Award

You do not need a special entry form to nominate someone for ILDA’s highest honor, the Career Achievement Award. You can simply enter by sending one or more nominations by email to ILDA by the deadline, Monday April 1, 2019 (at 11:59 pm your local time).

To enter, submit the nominee's name, plus a biography/description of the person. This can be a basic bio/description.

Later, after the deadline, we will ask for a more detailed biography/description. This should go beyond just a "resume listing" of places they have worked. It should include information about the career of the nominee and why his or her achievements are significant. If you are nominating another person, feel free to work with them, so they can help put together this document.

Every CAA nomination is good for five years. This means that once a person has been nominated, they automatically are considered for the next five Awards years (or until they win, of course). These are the "automatic" nominees for 2019:

To re-nominate someone, email to ILDA by midnight, your local time, Sunday, March 31, 2019.

All nominations received by the deadline, plus the "automatic" nominees, will be listed on the ILDA website later in the year. ILDA Members will be able to vote via email for the CAA nominees. And, at the 2019 ILDA Conference, the winner of the 2019 Career Achievement Award will be publicly announced.

When you are completely finished and ready with your forms and videos, submit your ILDA Artistic and Technical entries by uploading them to your own filesharing service such as Dropbox, Google Drive or OneDrive. Then email to ILDA with the link where we can download your file.